Which slate should I use?

Which roofing slate should I use?

There are many slates on the market. Slate used in roofing has to comply with standards for porosity, pyrite and mineral content.

All natural roofing slate has chipped or riven edge – not a sawn edge. This allows for easier drainage as the water channel formed between 2 slates side by side, is less likely to collect debris and be self flushing.

Hold the slate vertically in one corner and tap it with a hammer. A good roof slate should give a clear ‘ring’.

The wider the ‘spall’, or the chipped edge, the harder the slate, as the slate has been more compressed by nature when it was formed. A slate with steep edges indicates a soft slate.

The roofing slate we import from South America is not as soft as the English or Spanish slates, and is 1-2mm thicker, but we have found that it also lays much flatter.  It is expected that a harder roofing slate will last longer on the roof.

This roofing slate has all the required European CE certification.

Traditionally, in Australia roofing slate is from Spain or the U.K.  Some of the other sources are the US, Canada and South Africa and China.

Also available is the Welsh Penrhyn, a purple colour. It is one of the world’s finest slates, and traditionally one of the most well known. However they are also approximately 200% more expensive. 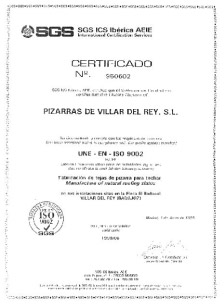